Prospectin’ Pete has a lead on a new titanium mine, and needs your help pitching a mining operation to investors. The mine can be represented as a tree: the mine entrance is the root of the tree, other tree nodes are pockets of underground titanium ore, and the tree edges are potential tunnels Pete can dig between two pockets (or between the mine entrance and one pocket, for edges adjacent to the root node). The tunnel connecting the $i$-th ore pocket to its parent has a length of $y_ i$ feet. One of the tree leaves contains the motherlode, and each other ore pocket contains $x_ i$ dollars worth of ore.

Pete begins at the mine entrance, and his goal is to reach the motherlode. Obviously, Pete cannot travel to pocket $i$ until all $y_ i$ feet of dirt in the tunnel leading to it has been removed. But once a tunnel has been completely excavated, Pete can travel that tunnel, in both directions, as many times as he wants.

Pete explores the mines by repeatedly performing the following steps, in order:

Note that the tunnel Pete chooses to dig in the first step of each round of digging does not need to be adjacent to his current location, so long as Pete can reach the tunnel by traveling through the mine along a sequence of completely-excavated tunnels. He can also choose a different tunnel each round, even if the tunnel he was digging in the previous round is not yet completely excavated. If Pete ends a round of digging with no money, and without having reached the motherlode, the mining operation is a bust and Pete goes home bankrupt.

Pete has surveyed the geology of the area and knows the mine layout, as well as the amount of ore in each chamber, but hasn’t yet decided on a strategy for how to dig the tunnels. He knows that in addition to any riches he earns from the mine itself, he will need some amount of startup money in order to reach the motherlode, and so he is courting investors. He wants to present them with two pieces of information:

This information will allow the investors to decide how much to fund Pete, based on how much they trust him to dig optimally without making any mistakes. 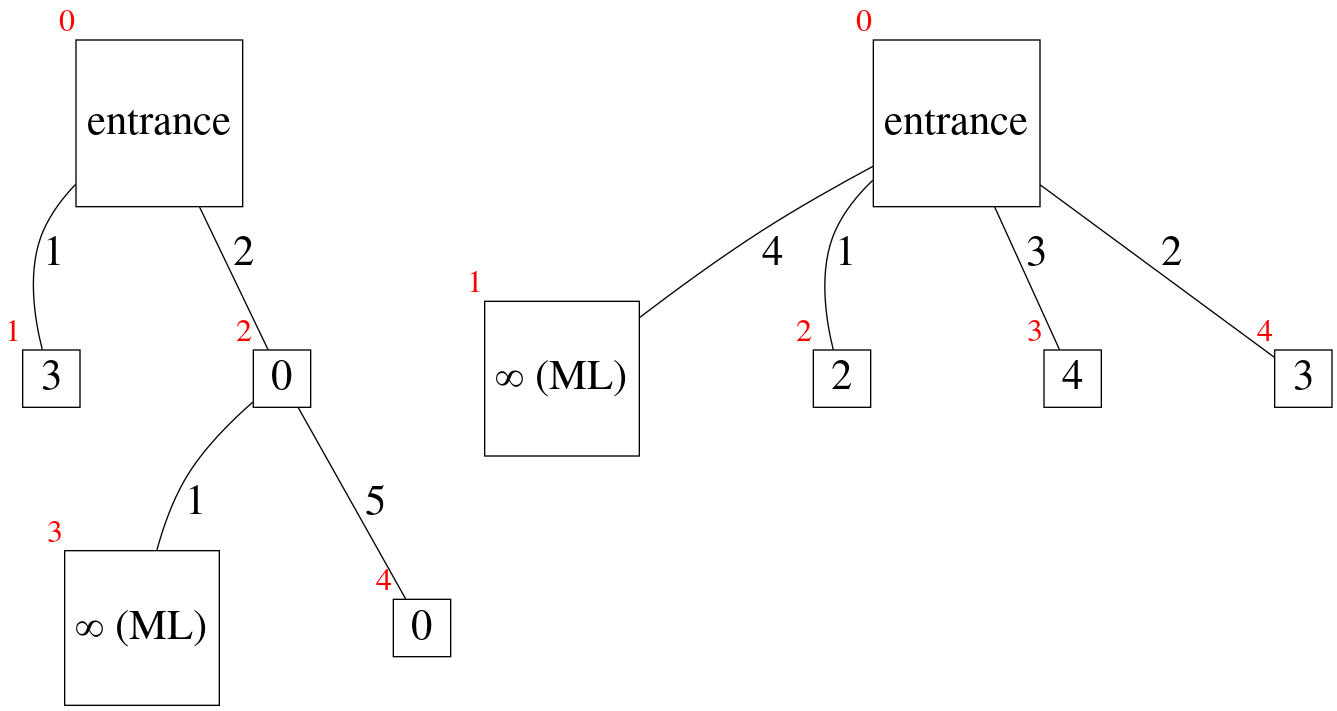 Figure 1: Illustrations of sample inputs $1$ (on the left) and $2$. Edges represent tunnels and nodes represent ore pockets. Ore values $x_ i$ in each pocket and length $y_ i$ of each tunnel are written in black text (“ML” stands for the motherlode). Nodes are labeled in red with their indices.

Note that node zero is the mine entrance; it contains no ore and has no corresponding line in the input. You may assume that the motherlode is a leaf of the tree (no node has the motherlode node as a parent).

Print two space-separated integers $a$ and $b$, the worst-case and best-case investment Pete needs in order to clear a path to the motherlode, as described in more detail above.